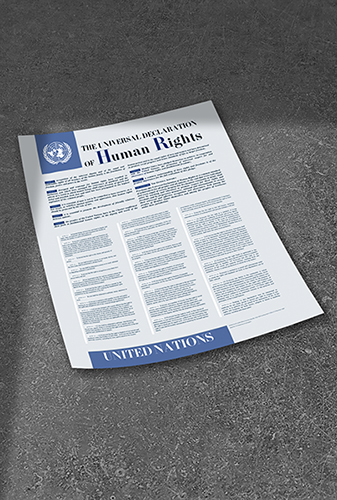 A Global Covenant concerning Faiths and Freedom of Conscience

Freedom of thought, conscience and religion underpins many of the other human rights that every person should enjoy, including freedom of expression. This is why this precious right is enshrined in the 1948 Universal Declaration of Human Rights. However, we cannot take this freedom for granted.

The Global Charter of Conscience brings religious and worldview tolerance back to the centre of public debate.

It was launched at the European Parliament on 20th June, 2012, followed by similar launches in several nations.

The Charter has been drafted by people of many faiths and none, politicians of many persuasions, academics and NGOs, all committed to “freedom of thought, conscience and religion” for people of all faiths and none.

The Charter calls for the cultivation of civility and the construction of a civil public square that maximises freedom for everyone. It provides a vision and framework to help us discuss and resolve our present problems in a constructive, rights-honouring manner. This long term endeavour is now even more important than it was at its 2012 launch.

As human interconnectedness increases with globalisation and online interaction, differences of belief can collide. The Global Charter of Conscience explains principles which will make it possible for human beings to live together with their deep differences.

The Charter outlines the vision of a civil public square, emphasising that

Since the Charter’s launch in 2012, intolerance between those of different religions and worldviews has only increased. Whether this intolerance is expressed in armed conflict, terrorism, discrimination or unjustified silencing of expression, it is clear that a new vision is needed to change our direction of travel.

A Charter cannot change the world. But, we invite you to consider the content of the Global Charter of Conscience and to reflect with others people of good will on how we can help to make the world genuinely “safer for diversity”.

In 2012, the Global Charter of Conscience was launched as a vision and a framework to make the world “safer for diversity” for all human beings. Ten years on and what has happened to everyone’s ability to flourish as free people living with diversity? Has there been an increase in respect for freedom of thought, conscience and religion for all and the cultivation of a culture of civility?

The Global Charter of Conscience sets out a vision of “freedom of thought, conscience and religion” for people of all faiths and none. It calls for the cultivation of civility and the construction of a civil public square that maximises freedom for everyone. Is this just a utopian dream? Possibly. But it is an essential vision, not a mere cosy idea.

This is a unique and timely
document, an excellent and detailed
follow-up to Article 18 and will
hopefully serve as an international
rallying point for all.


This is a powerful document. The
potential to inspire practical
commitment and to contribute to a
better understanding of human
rights in general is enormous.


Freedom is a precious gift from God. No one should be a slave to others because God created us all free.