A civil public square: what would it look like? 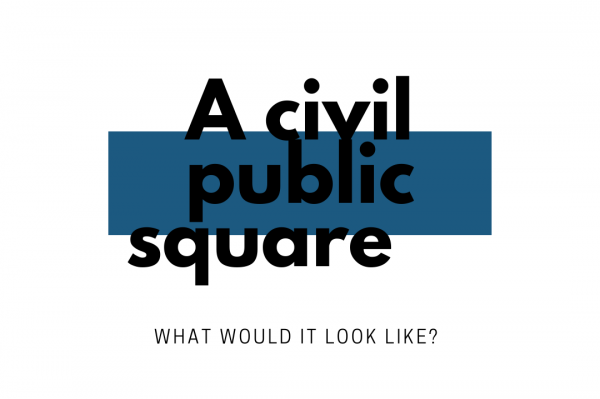 The Global Charter of Conscience sets out a vision of “freedom of thought, conscience and religion” for people of all faiths and none. It calls for the cultivation of civility and the construction of a civil public square that maximises freedom for everyone.

Is this just a utopian dream?

But it is an essential vision, not a mere cosy idea.

Without a civil public square, without the preservation of freedom of conscience and the related freedoms of expression and assembly, our increasingly plural societies will fall apart. There will be winners and losers, oppression and control, and the eventual death of democracy. It is simply impossible for truly democratic societies to hold together without the shared responsibility to protect these rights for all.

What would a civil public square mean in practice?

This would naturally lead to maximising the rights of all parties in contexts where different individuals’ rights clashed. People would accept the inevitable compromises needed and not fight to inflict defeat on the other.

Symbols and clothing expressing philosophical or religious beliefs could be displayed publicly if the individual so wished, provided there were no health and safety issues.

People would feel free to express their faith and opinions as they choose. Others may loathe those beliefs. Disagreement may be robust and noisy, but that would be healthy. There would be more listening and less trolling. The default would be reasonable behaviour because of an understanding that society thrives when there is an informal pact of mutual respect.[1]

The rights of every citizen would be upheld. Injustice against minorities must be properly addressed. Racism and other forms of hatred towards minorities are morally reprehensible. These evils should be exposed and strongly challenged.  Hate crime legislation should prevent or punish clearly harmful acts[2]. But, in a civil public square, everyone would understand the dangers to the individual and to democracy itself if strong protection for freedom of expression were not maintained.

How could a civil public square be achieved?

For a civil public square to exist, government action would be needed but, more important would be the cultivation of “habits of the heart”.

Civic education would be needed to nurture understanding of rights, responsibilities and respect.

A culture of rights, responsibilities and respect would be fostered on social media, with rudeness and hatred challenged.

Children would learn in school about the importance of a civil public square and be actively encouraged to interact with civility. They would learn how to disagree well and how genuinely to tolerate other people, even when they might utterly reject their beliefs or lifestyle.

Universities would be places where students and academics sought wisdom and truth together, allowed all ideas to be examined and critiqued and debated openly and respectfully. Everyone would understand how crucial academic freedom is to the health of free societies.

But, in the end, these things should not be forced.  If people do not freely opt to respect others it is censorship and suppression, not civility,.  You cannot mandate civility. It can only be constantly taught, modelled and encouraged.

When I value the innate dignity of every human being…

…When I accept the responsibility to protect the rights of others…

…When I respect others, even if sometimes I think their beliefs are terrible…

…Then freedom, democracy and societal cohesion will be secure.

That is how to guarantee my own human rights.

“To the extent that a society protects all these aspects of freedom for people of all faiths and none, it may be considered free and just,”[3]

[1] Consider how businesses like Airbnb work. Almost always, both host and guest act appropriately and are constructive in their interaction. There is equality in the business relationship because they know that the reviewing of each other will affect their reputation in the future. Does this give an idea of how respectful behaviour can be encouraged?

[2] The UN’s Rabat Plan of Action provides clear criteria to assess when freedom of expression should no longer be permitted because incitement to hatred has taken place.

[3] Article 5 of the Global Charter of Conscience.