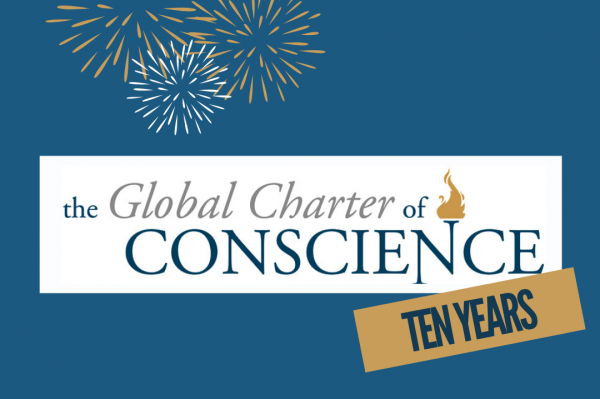 In 2012, the Global Charter of Conscience was launched as a vision and a framework to make the world “safer for diversity” for all human beings.

Ten years on and what has happened to everyone’s ability to flourish as free people living with diversity? Has there been an increase in respect for freedom of thought, conscience and religion for all and the cultivation of a culture of civility?

At least in Europe, the signs are not good.

Rather than actively defending freedom of belief for all, some governments are clearly suspicious of certain faiths and worldviews. Hungary’s Viktor Orban has equated Muslim migrants to poison and invaders.[1]  France has introduced a law on the “Respect of Republican Principles”[2]. This law is designed to tackle Islamic inspired terrorism but places suspicion on all faith communities. It introduces heavy administrative obligations, with the goal being excessive state supervision and control, not freedom.

Other governments are downplaying the importance of freedom of thought, conscience and religion because of other concerns. This can be seen for example in

Meanwhile, the European Court of Justice[4] has decided that employers may ban “any visible form of expression of political, philosophical or religious beliefs in the workplace.” Apparently an employer should be able to portray a supposedly neutral image as far as belief is concerned in order to prevent “social disputes.” But why is it that the displaying of a religious sign could provoke such a dispute? Surely it would only be because of the intolerance and/or oversensitivity of the client who is somehow threatened by what another wears and ultimately by what another believes. And the suppression of religious expression, far from portraying a neutral image, imposes a secularising one.

Individuals and groups may be increasingly adept at demanding their own freedom of conscience and the closely related rights of expression and assembly. But they are not necessarily as concerned for the same human rights for others. Too often, people shout others down on social media, and even pressurise employers, educational establishments or the authorities to curtail another’s rights.  One person’s “safe space” from being exposed to beliefs they find offensive is at the cost of another’s freedom of expression. This can lead, among other things, to banning of Pride marches, arrests for street preaching, censorship of apparent blasphemy, cancellation of room hire or job dismissals.

Public life is becoming more uncivil. Rudeness, hyperbole and shock tactics of politicians, online trolling, the extremism created by social media echo chambers, all these things make the idea of a “civil public square” seem even harder to achieve.  However, the Global Charter calls for a freely agreed covenant of duties and civility.  It does not want these things to be mandated by law.  Civility needs to be fostered through education and cultural expectation. But freedom of expression must be preserved. So any hate speech laws must have a high threshold of what counts as hate[5]. It is important to prevent real harm but also protect fundamental freedoms.

The covid-19 pandemic has been an utter tragedy, killing and ruining the health of millions, devastating mental health and economic wellbeing. But perhaps there is one small light in the coronavirus darkness. Many of us have learned two precious lessons.

We have been reminded of the preciousness of every human being, no matter their faith or worldview of any other characteristic. We have rediscovered the need for community, for cohesive society, for collective responsibility for the common good.

As Rabbi Jonathan Sacks put it, “Our sense of wellness depends on being part of one or several networks of relationships in which we are prepared to act for the benefit of others, knowing that they are prepared to do likewise for us.”[6]

Thus, the writers and supporters of the Global Charter of Conscience continue to hope that people will realise that the vision of a civil public square is not just a worthy idea.

It is an essential element of any healthy democracy.

It is vital if our diverse societies are to hold together and freedom is to survive.

Everyone should be free to live according to their conscience.

Everyone remains actively responsible for the freedom of others to do the same.

Will it be easy? No. Is it worth it? Absolutely!