Global initiative calls for a new “vision” of diversity 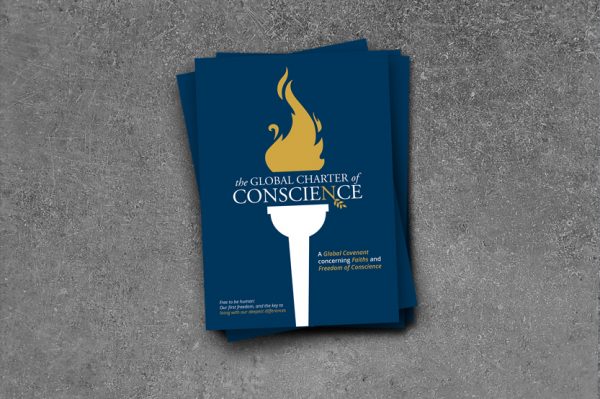 Brussels.
The growing tensions involving religion, worldview and ideology have become a massive global problem, an international group of leading academics and activists say to Europe and the world. The Global Charter of Conscience, a declaration reaffirming and supporting Article 18 of the Universal Declaration of Human Rights (about “freedom of thought, conscience and religion”), was launched officially in the European Parliament today, in an event hosted by Finnish MEP Sari Essayah. This firm and principled document aims to bring religious tolerance back to the centre of public debate with guidelines to discuss and resolve present problems in a constructive, rights-honouring manner.

The document has already gained significant support, including from Dr Heiner Bielefeldt, United Nations Special Rapporteur on freedom of religion or belief, and Dr Habib Malik, a rewarded Lebanese human-rights activist, whose father Charles Malik was the chief drafter of the Universal Declaration. “This is a powerful document,” says Heiner Bielefeldt, who wrote a special recommendation for the Global Charter of Conscience. “The potential to inspire practical commitment and to contribute to a better understanding of human rights in general is enormous.”

The Charter was initiated by English author and social critic Dr Os Guinness. The text has been drafted under the leadership of Os Guinness and Dr Thomas Schirrmacher, a German sociologist of religion. It was reviewed over the course of three years by people of many faiths and none, including more than 50 academics, politicians of many persuasions and NGOs, all committed to a partnership on behalf of “freedom of thought, conscience and religion” for all. “We want this to become something that people can refer to,” says Guinness. The drafters of the Charter are now opening it to further endorsements, and are working with activists towards practical implementation. The clear intent is also to impact civic education, Guinness adds, “so that freedom becomes in Alexis de Tocqueville’s famous term, the ‘habits of the heart.’”

The Global Charter of Conscience underlines the challenges of pluralism in the globalised world, with its rising diversity of beliefs, worldviews and ways of life. It sees many current approaches to diversity as increasingly problematic, and even dangerous. A recent study showed that three quarters of the world’s population live in countries where is a high degree of menace to their faith. In France, Sikhs found themselves forced to remove their turban, whilst in England, employees have lost their job for being unable to act on religious conscience in the workplace. The Charter points that “the responsibilities of a civil public square all pose a particular challenge to the traditional standing of established, or monopoly religions,” which should recognise their excesses as well as the rights of others, including non-religious people. It also challenges “exclusive forms of secularism,” and advocates for “a proper recognition of the rights of religious people in public life.”

“The Charter in fact allows everyone to be free to be faithful to what they believe, and acknowledge the ‘dignity of difference’,” says Thomas Schirrmacher. “We need to provide a solution to do away with the polarisations and aggravating the bitterness surrounding religion in public life – as in the so-called culture wars.”

The Global Charter of Conscience encourages a new culture of civility where robust and noisy public debate is seen as good for society. “This is the only way we can secure and uphold freedom of conscience in the twenty-first century,” says British barrister Dr David McIlroy, another endorser.
Subsequent launch events will follow in Bonn and in London in the coming days.