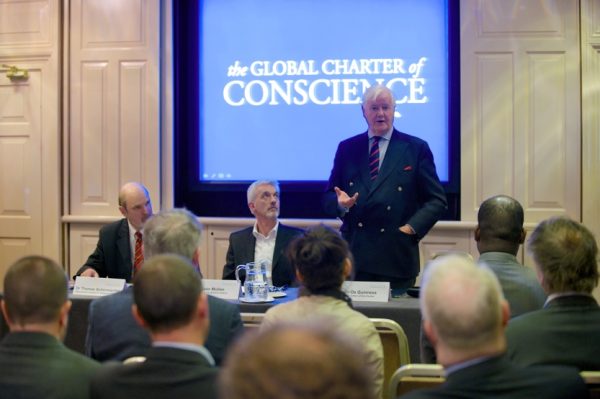 Introducing the Irish launch of the Global Charter of Conscience on 9th May, Seán Mullan from the Evangelical Alliance Ireland said there could not be a more appropriate time to raise awareness of such an important Human Rights document

First published at the European Parliament in Brussels, the Global Charter of Conscience was officially launched in Dublin by its co-author Dr Os Guinness.

In modern times, freedom of conscience is under threat from government oppression, sectarian violence and Western confusion, Dr Guinness said.

“One of my sharpest boyhood memories was when I was 7 years old in China,” Dr Guinness recalled. “My dad put his hand on my shoulder and said, ‘Son we are in trouble. It will be a matter of weeks before the communist troops are here.’ During the Reign of Terror, we were under house arrest. It was my first experience of government oppression and of very severe persecution.”

The Charter was created to re-affirm and celebrate Article 18 of the Declaration of Human Rights, a statement of freedom of thought, conscience, religion and belief applying equally to people of religious belief and those with a secular worldview.

“We live in a world of exploding diversity. Entire worldviews live shoulder to shoulder. The question is how do we live with our deepest differences? Many people think religious freedom is freedom for the religious. Article 18 is for all worldviews and not purely for the religious. The most unfashionable groups must still know that their rights are guaranteed,” Dr Guinness added.

German academic and human rights activist Dr Thomas Schirrmacher, who is Director of the International Institute of Religious Freedom, affirmed the Charter’s significance.

“As someone who is on the road for human rights all the time, my experience is that everybody fights for his own human rights and denies the same rights to others who are different,” Dr Schirrmacher said. “When we lobby for the freedom of everybody, we will have the most freedom ourselves.”

Too often each grouping, whether religious or secular, will complain that they are the victim. However, when one worldview becomes dominant, others suffer.

“We can only find freedom all together or not at all,” Dr Thomas Schirrmacher stated.

“Recently, I was lecturing in Nepal where for several years, they had a Communist dictatorship in what is a very religious country. Now, many Hindus want to take revenge for the Communist era by putting atheists in prison. If this country wants to have a future, it will not help if everybody struggles for power. The State should not dictate how people should think or believe.

“My experience is that the Global Charter of Conscience opens the space for debate between people who have not talked to each other for a long time. When religious people and non-religious people come together and talk to each other we can discover how to maintain both sides in a society.  It is not about who should leave but how we can co-exist. Let’s find common solutions.”

“In a world where nobody has freedom, I can’t live as the only one who is free.”

Responding to questions from the audience of human rights advocates, journalists, international faith leaders and lawyers, the panel agreed that there are a whole range of issues in which freedom of conscience is under threat in the West.

“It is important to consider if you deny freedom of conscience what else will suffer,” Dr Guinness warned. “It is possible to kill the goose that lays the golden eggs.”